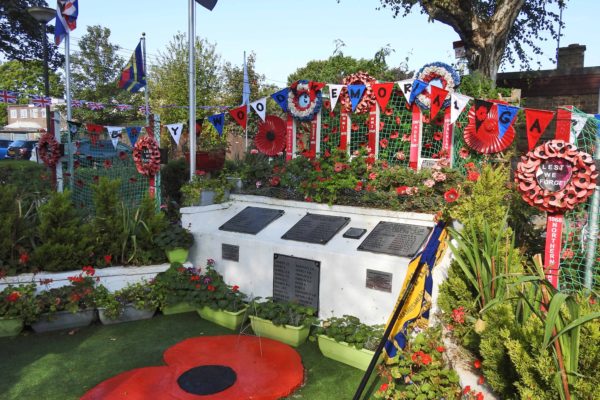 As part of the commemorations to mark the centenary of the outbreak of the First World War, the Royal Borough of Greenwich donated an unused and derelict piece of land for the creation of a Garden of Remembrance in dedication to those people of Abbey Wood who had died during that and other conflicts. This came about following a meeting in February 2014 when Greenwich Council’s Community and Diversity Department representative Michael Hammond proposed donating a derelict piece of land in Rosedale Close, Abbey Wood.

The particular piece of land they donated was a wilderness with weeds, brambles and trees sixty feet tall overlapping the fence area. This was an area with high levels of anti-social behaviour, used by criminals to hide drugs and stolen goods.

In April 2014, under the guidance of Greenwich Council employee Terry Evans, work on what would become the Abbey Wood Memorial Garden began; firstly, with the Community Payback team who were brought in to clear the site. It was during this work that a previously hidden footpath was discovered.

Plans were made to turn the now cleared plot of land into the Garden of Remembrance, beginning with a simple memorial stone listing the names of fifteen Abbey Wood servicemen who had died during the First and Second World Wars. Initially we had no money but Lady Luck was with us with a grant of £200 by C2K Community Centre and a £300 donation by Network Rail. From this humble beginning, the Memorial Garden was officially opened by Mayor of Greenwich, Councillor Mick Hayes on the 30th August 2014, accompanied by soldiers from the RA Barracks led by Major Gerry Porter MBE, the Royal Air Force Cadets under Flt Lt Bird and Bugler, Darren Riley. The Vicar of William Temple Church; Rev Jane Yeadon carried out the blessing and dedication. 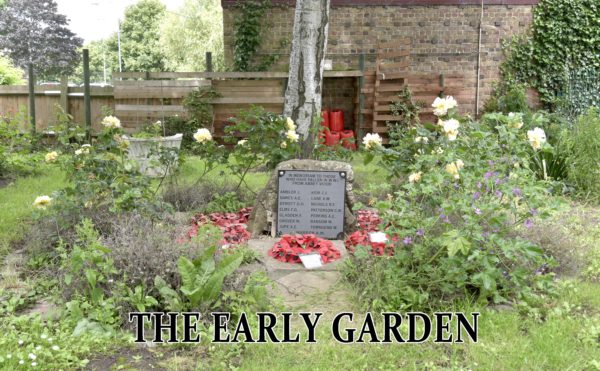 Unfortunately, in the years that followed, all the committee members drifted away leaving the founder, John O’Rourke to carry on alone; John had ambitions to develop the garden further but with no funds and no plan, in September 2016 he made the decision to close the garden to plan its full redevelopment. Over the following Winter, John began work on what would become the new garden, gathering materials where he could from people willing to donate and using his own money when he couldn’t. 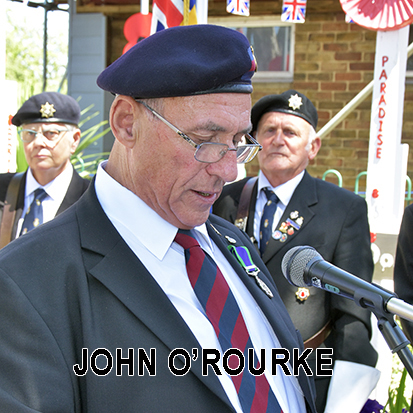 He first hired a tiller from HSS Tool Hire in Plumstead and chopped up all the flower beds, then removed the the memorial plaque and stored it at home. By the middle of November, the digging out and laying of the new foundations was complete. During December John managed to collect over 1000 used bricks plus 27 barrows of paving slabs and lots of hardcore.

In February 2017, Crossrail contractors Balfour Beatty came to the rescue with an offer to help. Over the next six weeks the garden was a sea of orange as workmen brought in concrete and other materials, organised by Andy Bradford of Balfour Beatty. Money was also raised by local people and others to a total close to £10,000. Council Officer Catherine Diamond took over from Michael Hammond and through her had the trees trimmed and one rotten one cut down. She also provided us with a Nectar Card with 10,000 points on it. With this she and John visited Homebase in Kidbrook and bought 28 fence posts and a lot of paint.

During this time a bank account was set up and also a GoFundMe page to receive donations.

Also, During February 2017, John was joined by Thamesmead & Abbey Wood Royal British Legion President and Standard Bearer Roy Williams and together they did a huge amount of digging and planting. Donations were fairly slow in coming at first but a surprise donation of £1500 from Skanska Costain was a most welcome surprise. 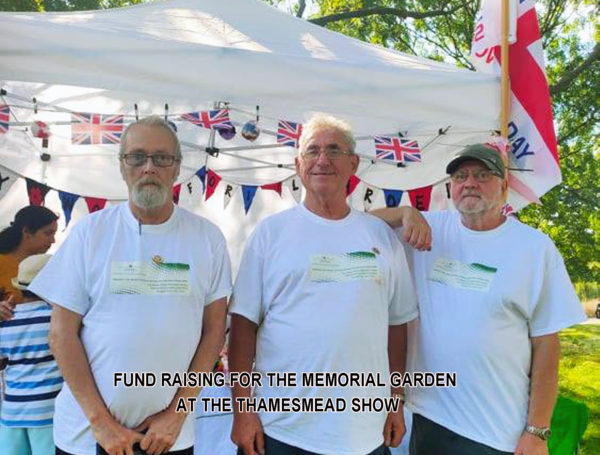 The running of the garden was the responsibility of its Chairman Tony Cox who unfortunately had to resign his post due to family reasons and was succeeded by Kevin Farrow who did great work together with his partner John Lesley Thompson. Sadly, Kevin passed away after a short illness and his position was taken over by John Lesley Thompson. The current committee comprises John Lesley Thompson (Chair), John O’Rourke (Secretary), Richard Spink (Media), Margaret O’Rourke, Katy Waldron, John Walton, Chris Walton, Tony Cox. 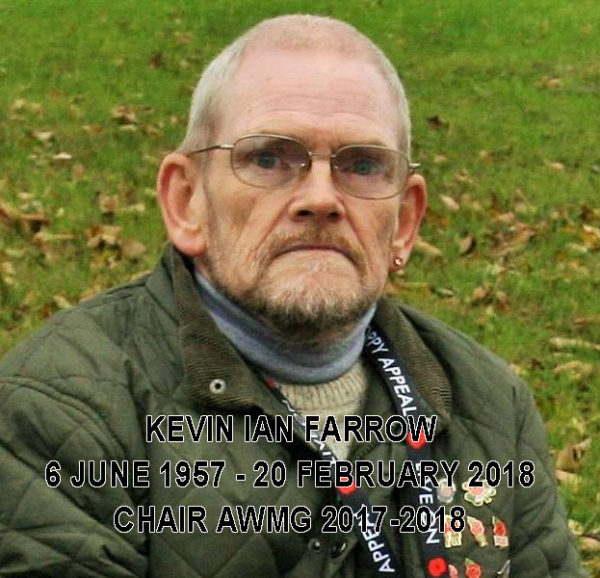 Research threw up a number of surprises. Albert Edward Ward who lived in Federation Road, Abbey Wood, died when his dugout was bombed. He left behind a Wife and six Daughters. Two of his Daughters, his Granddaughter and Great-Granddaughter attended out remembrance day on 2 July 2017. Alex McLeod School had its roof blown off in a bombing raid which left two soldiers killed. Albert Lane who lived in Abbey Grove was killed and his body was discovered by a German patrol who thought he was one of theirs and buried him in a German cemetery. When the error was discovered, his body was removed and placed in a British communal grave. In 1924, the decided to exhume him and give him a grave of his own but there was nothing left except for his boots and cap badge; luckily, he had put his name in his boots and the distance from boots to cap badge was 6ft 2in, his exact height. 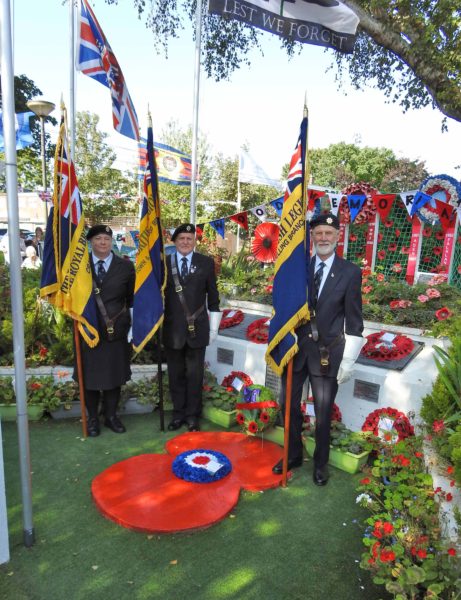 Today, our garden is central to all memorial events and we also have a community memorial wall honouring those who have passed locally. Anyone wishing for more information about how to add the name of their loved one on the memorial wall can contact us on 07889 755838.

Local school children regularly come for educational visits and we get the children involved in important events: children from DeLucy School took part in the flag raising ceremony to celebrate the Queen’s Platinum Jubilee on 6 February 2022. 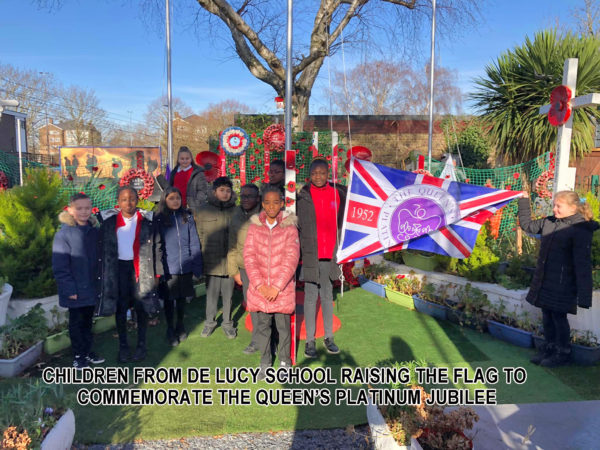 The Abbey Wood Memorial Garden is quite unique, being the only one of its kind in South London. It is a community garden and one of pride and respect, bringing home our soldiers names to Abbey Wood. There are currently 82 names on the memorial, 16 of which will be added in 2022. 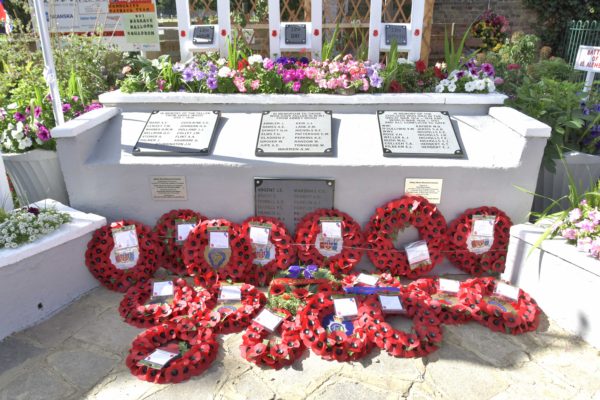 We would especially like to express our thanks the the following people, without whose support, none of this would have been possible:-

Special thanks must go to Jane Bannon, Proprietor of the Birchwood Pub, Grovebury Road, Abbey Wood and her staff for providing us with a headquarters for our meetings and all the other support they have given us over the years.

The Thamesmead & Abbey Wood branch of the Royal British Legion has been helping local servicemen and women and Legion members for over 35 years. The Branch President and Standard Bearer is Roy Williams and the Chairman is David Randall, assisted by John O’Rourke as Vice Chairman. Karen Rex, Secretary; Trevor Spicer, Welfare Officer: jean Spicer, Social Secretary: Richard Spink, Media Officer. We have many loyal member who participate in our Annual Poppy Appeal to raise funds for service personnel. The branch regularly takes part in the memorial garden and the two organisations combined make Abbey Wood and Thamesmead a better place to live, rich in history and heritage.

This date was chosen as the 75th anniversary in honour of the Battle of El Alemein.

A large parade took place and included 901 Barrage Balloon Squadron who are Based in Wales but served in Abbey Wood during WWII and lost six men, the names of which are listed on the memorial; Soldiers from The Royal Artillery Barracks; Royal Navy Cadets: Pearly Kings and Queens from Tower Hamlets. Also in attendance was Col. Rory Radford of the Canadian High Commission (two of the names on the memorial are of Canadian citizens).

Dr Pieter Van Der Merwe, Deputy Lord Leiutenant of the Royal Borough of Greenwich performed the opening of the garden and Mayor Peter Brooks was in contact with 901 barrage balloon squadron based in Wales but they served in Abbey Wood during ww2 and lost 6 of their men who are on the plaque they said they would send representatives for the opening day ,the army said they would send men and the Royal navy cadets agreed to lead a parade veterans were invited as we’re 4 Pearly Kings and Queens from Tower Hamlets also invited was Col.Rory Radford of Canadian embassy as two Canadians are on the plaques the mayor’s if Greenwich and Bexley agreed to come and Dr Pieter Van Der Merwe Deputy lieutenant for Royal borough agreed to perform the opening of the garden while the mayor of the Royal Borough Peter Brooks unveiled the monument the leader of the council Denise Hyland attended and many councillors Cllr Alan Tills represented Lewisham borough standards were paraded by Thamesmead Abbey Wood , Crayford, Bexley heath and Welling ,Eltham and We’ll Hall ,Charlton and Black heath branches of the Royal British Legion the parade was led by Lily Pethers in a wheelchair pushed by a Royal Naval chaplain Rev Christopher Owens from West Ham sea cadets it was a wonderful day and worth the work. 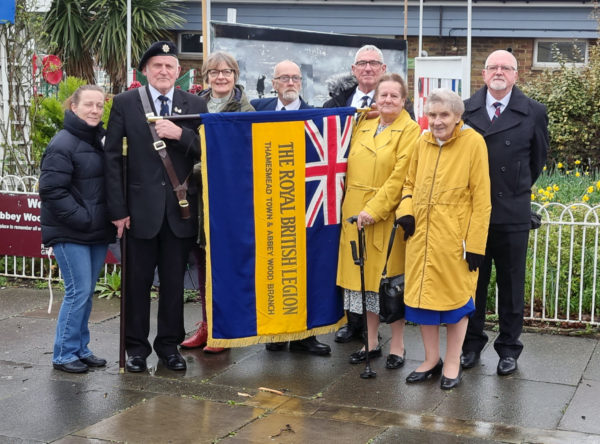 There is a response to this story here: THE ABBEY WOOD MEMORIAL GARDEN